Today, President Serdar Berdimuhamedov, who is on labor leave on the Caspian coast, took part in the ceremony of laying the foundation of another important object of transport infrastructure – a new automobile bridge across the Garabogaz Kel Bay along the Turkmenbashi–Garabogaz–Kazakhstan border highway.

Thanks to the measures consistently taken in this direction, large-scale work has been carried out in the country in recent years to develop road construction, create new international transport corridors, and consistently increase the volume of cargo and passenger traffic.

A clear evidence of this is the steady improvement of the road transport infrastructure, the construction of hundreds of new highways and bridges erected with the most advanced technologies, the formation of a developed system of highways that meet all modern requirements.

Upon arrival by helicopter to the place of the bridge foundation laying ceremony, the head of state was greeted with great enthusiasm by the numerous participants of the ceremony gathered here.

Today inspired song and music performances of artists bring bright touches to the atmosphere of joy and celebration reigning here.

Then President Serdar Berdimuhamedov goes to a building specially prepared for this occasion, where he gets acquainted with projects for the construction of highways and bridges.

Here you can see the powerful equipment that will be used in the construction of a new bridge across the Garabogaz Kel Bay.

Cabinet Deputy Chairman Ch.Purchekov reported to the head of state on the work being carried out in the road construction sector, and through the standard projects presented here, he spoke about the potential of the country’s international transport corridors.

As can be seen from the illustrated projects, maps and diagrams presented here, the country is implementing program measures for the development of transport and logistics infrastructure in the North-South and East-West directions, which ensures the active integration of Turkmenistan into the global transport system.

The construction of a new bridge across the Garabogaz Kel Bay will increase the importance of the North-South transport corridor at the international level. The implementation of this project was entrusted to Turkmenistan’s long-standing partner, the Altcom Road Construction Limited Liability Company.

The diagrams show a detailed plan of work to be performed by the contractor. In particular, there was a report on the planned parallel construction of structures for various purposes along the Turkmenbashi–Garabogaz–Kazakhstan border highway.

Among them are recreation centers for drivers and passengers, a hotel, maintenance centers, bus stops, automated systems for monitoring the mass and dimensions of vehicles, lighting, and road signs.

Expressing gratitude to Arkadagly Serdar for the constant attention paid to the development of the country’s road transport infrastructure in accordance with the requirements of the time, Deputy Prime Minister Ch.Purchekov assured that coordinated work will be provided for the successful implementation of the tasks set.

Highlighting that the new bridge, which will become an important part of the North-South route, will be of great importance not only for Turkmenistan, but also for the entire region, President Serdar Berdimuhamedov emphasized the need for the quality of construction to meet modern requirements.

Special attention should be paid to the completion of all planned construction projects within the specified time frame, the head of state said, instructing the Deputy Prime Minister to constantly keep under personal control the progress of ongoing work.

Then the head of Turkmenistan proceeded to the meeting room and went to a specially designated place for him.

Welcoming all those gathered, the President noted the historical significance of today’s event – the laying of the foundation of another significant construction for the country’s economy – the automobile bridge over the Garabogaz Kel Bay.

“We are doing a lot of fruitful work to improve and consistently develop the transport and transit capabilities of our independent neutral Homeland. A modern system of cargo and passenger transportation is being created using the best international experience. The indisputable evidence of this is the new highways and bridges being consistently built in the country,” the President of Turkmenistan underlined.

As noted, major projects implemented in this direction make it possible to maximize the transport and transit potential of our country. Turkmenistan, recognized as the center of the Great Silk Road, currently plays an important role in its revival in a modern format.

The new form of the legendary highway promotes further increase of the socio-economic potential of the countries of the region.

Our wise ancestors considered the laying of roads and the construction of bridges to be a sign of statehood and turned this matter into a noble tradition, President Serdar Berdimuhamedov said, highlighting that the large-scale work being carried out in the country today in the road transport sector testifies to its worthy continuation.

“Taking into account the increased demands of modernity, we considered that it would be expedient to begin construction of a new automobile bridge across the Garabogaz Kel Bay. The resolution of June 16 of this year provided for the preparation of design and estimate documentation and the construction of a road bridge with a total length of 354 meters and a width of 21 meters. The bridge will be built on the highway going from Turkmenbashi through the Garabogaz Kel Bay to the border of Kazakhstan,” the President continued.

“I am firmly convinced that the implementation of this project will have a positive impact on improving the social and living standards of the people, the development of the transport and logistics system of the country,” the head of Turkmenistan underlined.

Congratulating the audience with all his heart on laying the foundation of a new modern bridge in the era of the Revival of a new epoch of a powerful state, President Serdar Berdimuhamedov once again wished everyone good health, prosperity and great success in their work.

Then the floor was given to Alexander Tislenko, Chairman of the Board of Directors of the Financial and Industrial Group of Altcom Road Construction LLC.

As it is known, it was this company, which is a long-standing partner of Turkmenistan in the road construction sector, that was entrusted with the design and construction of a road bridge across the Garabogaz Kel Bay along the Turkmenbashi–Garabogaz–Kazakhstan border highway and the roads leading to it.

Addressing President Serdar Berdimuhamedov and all participants of the ceremony, the head of Altcom congratulated everyone on the laying of the capsule on the occasion of the start of construction of an infrastructure facility – a road bridge across the Garabogaz Kel Bay on the Turkmenbashi–Kazakhstan border highway.

Expressing sincere gratitude to the leadership of Turkmenistan, which is open to equal and mutually beneficial partnership, for the trust and support rendered, A.Tislenko emphasized that it is a great honor to make a feasible contribution to the future economic development of the country.

Referring to the history of fruitful cooperation established in 2009 with Turkmenistan, being a stronghold of peace, happiness, stability and prosperity, the head of the foreign company noted that during this time a number of important projects have been implemented, including the construction of the Turkmenabat–Farab road and railway bridges, the Kerki–Kerkichi Road Bridge, two railway bridges Kerki–Ymamnazar, as well as the runway at Dashoguz Airport.

Speaking about the consistency and foresight of the President of Turkmenistan in achieving grandiose successes in the formation of an influential and authoritative state both at the regional and international level, the speaker noted that in a short period of time our country has managed to become the largest transport and transit center.

Today, Turkmenistan continues to actively and successfully revive the Great Silk Road, initiating the promotion of interconnectedness of infrastructure in the region and the construction of cross-border transport corridors in the form of modern road, rail, sea and air routes, which makes it possible to bring cooperation between Asian and European countries to a qualitatively new level.

Expressing sincere gratitude to President Serdar Berdimuhamedov for the opportunity to take a direct part in the creative processes for the benefit of Turkmenistan and the Turkmen people, A. Tislenko assured that the company he heads will continue to make its strong contribution to strengthening the economic power of Turkmenistan.

Then the country’s President and numerous participants of the celebration were shown a video presentation of another important infrastructure facility, which allowed them to get a visual idea of the technical characteristics and the enormous importance of the new automobile bridge for the further development of the domestic road transport infrastructure, building transit potential and strengthening trade and economic ties with neighboring countries.

In accordance with the contract concluded with the State Agency for Road Construction Management, a modern road bridge across the Garabogaz Kel Bay and roads leading to it will be built along the Turkmenbashi–Garabogaz–Kazakhstan border highway within two years. The total length of the bridge with two-way two-lane traffic will be 354 meters, width – 21 meters.

The bridge being laid today will also become part of the planned reconstruction of the Turkmenbashi–Garabogaz–Kazakhstan state highway.

The transport and communication sphere, being one of the key segments of the modern world economy and trade, directly affecting the stability and balance of world economic relations, is also of great importance in solving the problems of sustainable development.

Thus, this project, aimed at realizing the existing impressive transport and transit potential of Turkmenistan and expanding mutually beneficial international trade and economic cooperation in the interests of well-being and sustainable development of the region and the whole world, will directly facilitate improving the standard of living of the population.

At the end of watching the video, the children ask President Serdar Berdimuhamedov to give his blessing to the start of the construction of a new automobile bridge and write a memorable message to descendants on the occasion of today’s significant event.

Having made a memorable record, which is placed in a special capsule, the head of state leaves the conference hall and goes to the bridge laying place.

Here, representatives of the younger generation turn to the country’s President with a request to lay the foundation of a new automobile bridge.

The climax is coming.

To the stormy applause of the audience, President Serdar Berdimuhamedov lays a capsule with a message addressed to future generations of Turkmen people in the foundation of the bridge foundation and throws the first shovels of concrete into the dug pit, giving a symbolic start to construction.

The head of state presents memorable gifts to children.

The President of the country has photograph taken with Turkmen youth as a souvenir.

At the end of the celebration, congratulating everyone once again on today’s significant event, President Serdar Berdimuhamedov warmly said goodbye to the audience and left the venue. 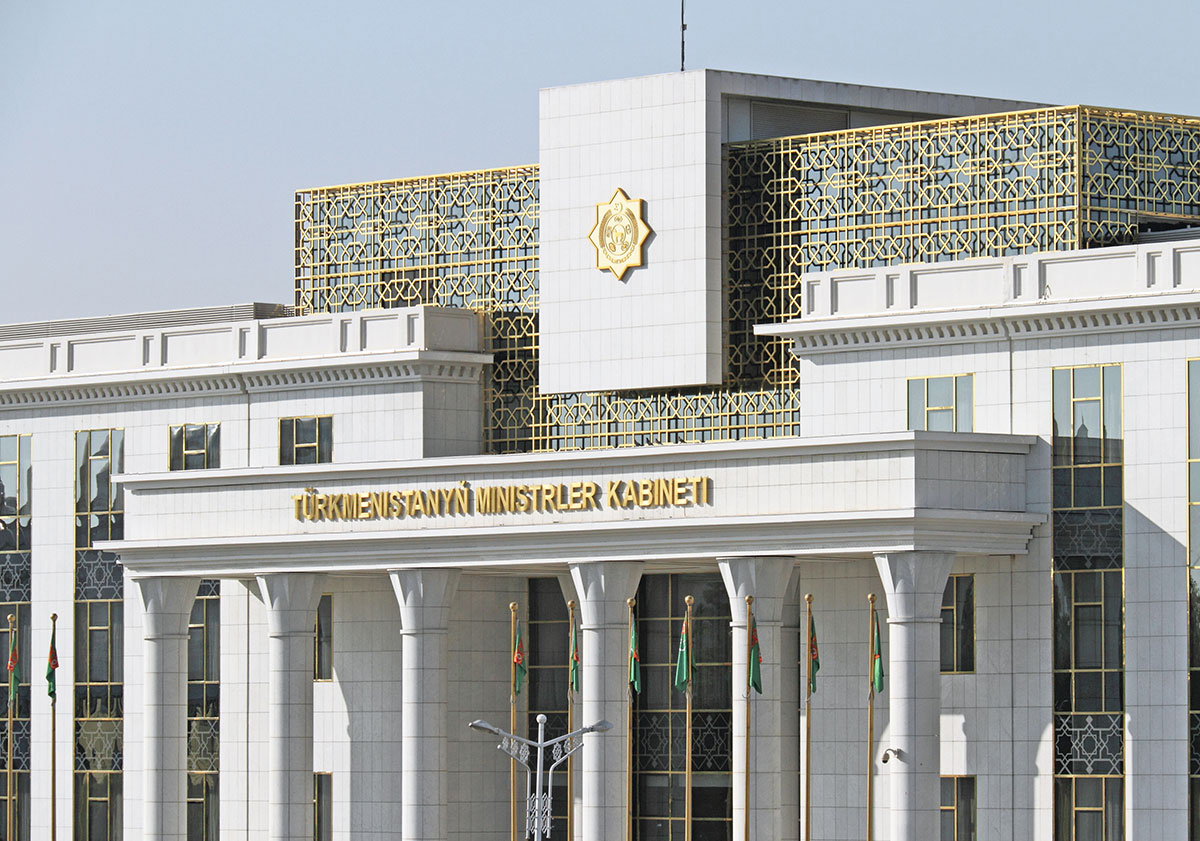 Meeting of the Cabinet of Ministers of Turkmenistan 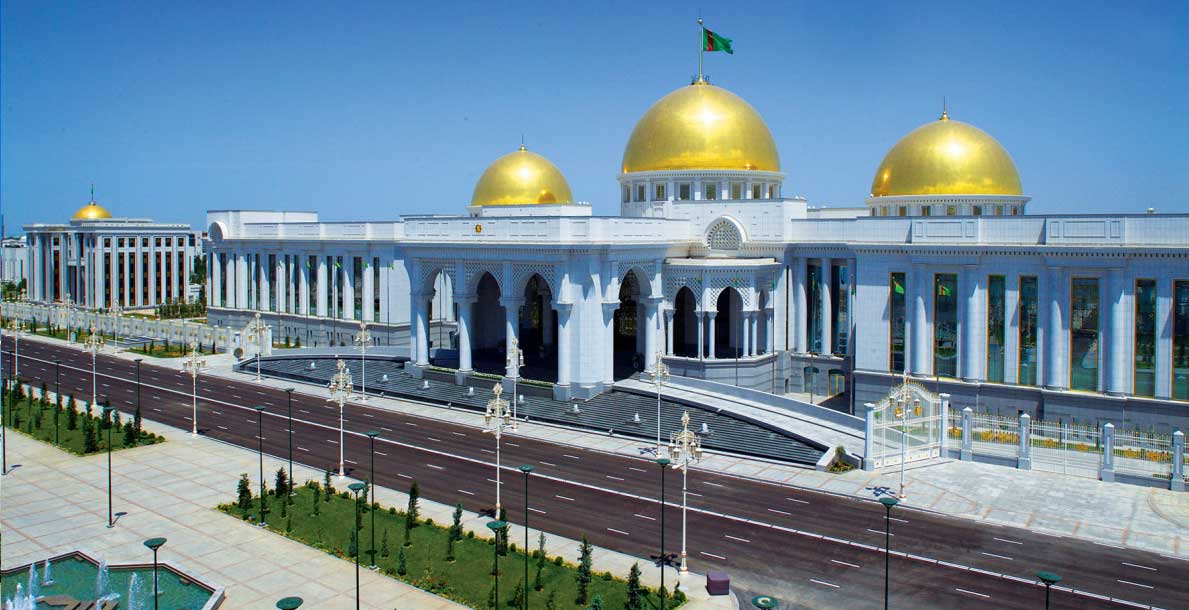 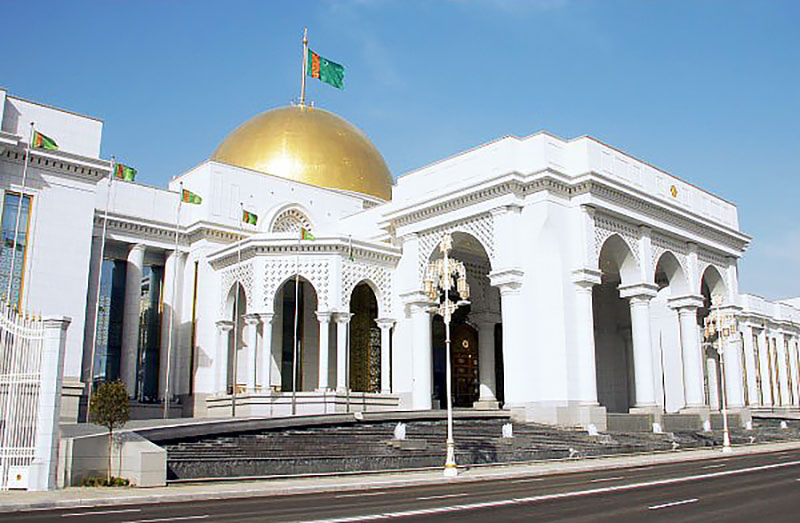